The Norwegian Bliss sailed her maiden voyage at the first of June 2018. She made news with her race track and water slides but the real news to me is that she feels grown-up. Gone are the 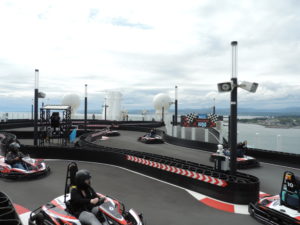 unfortunate decorating mis-adventures that preceded Frank with former NCL new builds. The Bliss exudes warmth and understated elegance. Every Norwegian ship will have undergone the Norwegian Edge by the end of 2018; the vision of the company is to keep every ship looking like new with as many of the innovations as can be incorporated from the new builds.

Specialty restaurants are numerous on Norwegian providing a wealth of options for foodies. So much cuisine diversity is important to the residents of the exclusive enclave, The Haven. These guests are drawn to that class for the quite serenity and pampering service within the cocoon of the key access area, which is just outside of one of the most vibrant ships at sea.

Entertainment is exceptional. The Jerseys Boys show is a true Broadway show brought to sea with flawless execution. Reserve as soon as possible as this two-hour show was at 7 & 10 and was totally booked early in the sailing for the first show. These shows are complimentary but do require advanced reservations. There are only two support beams obstructing 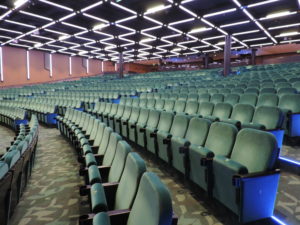 site lines, however you should still plan on arriving 20 minutes early for the main shows.

Unlike some of the earlier builds The Waterfront has totally unobstructed views. I did notice that our balcony on deck 10 did have quite a bit of noise wafting up from this area when the weather is nice. The venues on The Waterfront are specialty venues with extra charges.

Overall the Bliss is tasteful with a serene color palette. Furnishings are upscale and classically contemporary. My favorite areas are the forward observation lounges. They have a feeling of home with extraordinary views. The only area that was a disappointment was the Manhattan room, generally this is one of the most beautiful areas on a Norwegian ship. The Bliss should appeal to a broad range of passengers including those who have never cruised.

There are only two elevator banks and the elevators are slow. I was surprised that dynamic elevators were not utilized since all other technology seems state of the art. The banks of sound and lighting equipment even in such small venues such as Q is impressive.

Internet on our sailing was average for ships. I had no trouble connecting or staying connected. 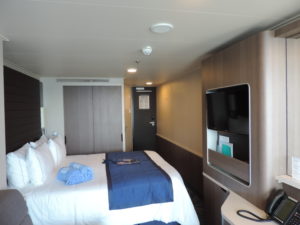 The small entertainment options are very popular. Arriving early is a good idea. We did not have a reservation for the comedy club the last night, but we were able to join during the warm up set before the main act for the late show. Both were very good. The piano bar in The Brewery was also fun and well attended.

I can see the Bliss appealing to a wide variety of cruisers, in particular first-time cruisers. The newer Norwegian ships already appeal to multi-gen groups and younger cruisers and the new open-concept of The Haven will certainly be attractive to the active, affluent passenger who is interested in a vibrant ship with diverse food and entertainment options. Empty nest couples will probably still gravitate to Oceania, which has also benefited from the merger with improved entertainment.

I was particularly impressed with the family ocean view cabin I viewed. Lots of storage, a large window, spacious and a tub. The studio cabins had the “porthole to nowhere” replaced with a virtual

window. We stayed in a standard balcony which felt tight, certainly upgrade to a mini suite if possible.

Tips
• The only amenities in the standard cabins are a bar of soap and a small tube of lotion that are NCL branded, the liquid soap and shampoo are in institution style dispensers. Even upon request conditioner was not available.

• In the main show lounge handrails are only on the outside walls. Both entrances are on deck 7.

• We booked one shore excursion. It seemed expensive and only had 15 participants. The equipment, guide and driver were good; however, the afternoon tea was at 10 AM. The same tea booked in the afternoon independently is $33 pp rather than the $99 charged by NCL.

• Don’t miss the Seafood Extravaganza in the buffet, fresh, beautifully presented and plentiful. I was told it would be offered once each cruise during the Alaska season.

• Deviled eggs on a cruise ship? Absolutely! Not my recipe, but still very good. A BBQ joint at sea…. complete with red solo cups and servers in bolo ties. The Brisket and ribs were great.

• The fish in the carpet of the cabin corridors always swim toward the bow of the ship.